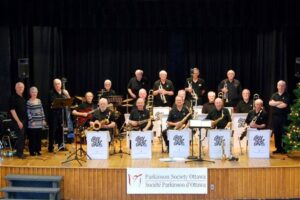 How did it all start?

With  the Good Companions Centre as its home base, the band, originally known as the Grey Jazz Band, was formed as a recreational activity for the Centre.  Over the years, the band has stayed true to its roots by continuing to rehearse at the Centre as well as support dances and other special activities there.

Because of the quality of the band, it grew in popularity and along the way attracted retired professional musicians  and other players who wanted to continue making music in a top level band.  As a result, the band became known as the Grey Jazz Big Band and is second to none when it comes to providing an entertaining programme ranging from music of the big band era to the popular hits of today.

Grey Jazz is also active in Ottawa’s charitable community.  The band provides first-class music for events such as the CHEO Telethon, the annual Mayor’s Breakfast for Seniors and for organizations including the Ottawa Heart Institute, the Kiwanis Club, the Parkinson Society of Ottawa, and the Perley and Rideau Veterans’ Health Centre.

Over the years the band has also performed at numerous high-profile events including a Royal Visit, the opening of the Canadian War Museum and the Ottawa Jazz Festival.